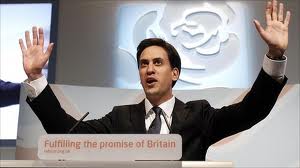 This week I was asked to do an analysis of Ed Millibands’s recent Leader’s Speech to The Labour Party Conference as a presentation. I didn’t analyse the speech from a the political point of view,  but from how it was delivered.

As you know over 50% of the meaning of any communication has nothing to do with the words that you say, but is all to do with your posture, gestures, facial expressions, how you use your voice, as well as how you actually structure your presentation or speech  and that’s what I focussed on.

This blog post is a longer version of the analysis that I talked about  briefly on BBC Radio Merseyside. You can listen here:

There are some distinct differences since his acceptance speech just over a year ago.

When he came onto the podium he appeared to be very relaxed, composed and assured. To begin with his stance was good, his weight was evenly distributed over both feet and he looked grounded and confident. His hand rested lightly on the lectern, again showing he was confident and relaxed.

He was smiling, warm and engaged the audience, making a self deprecating  joke which can be a way of building rapport.

As he proceeded through his speech he began to shift from side to side a lot, and together with his palm upwards gesture this can be perceived as lacking confidence in what he is saying – shifting about can be interpreted as being shifty. Now you may be thinking  “no, that’s not true. I don’t see it that way at all” but  some people watching will and it’s all about engaging all of the audience. Movements and gestures tend to be interpreted at an unconscious level and as a speaker it is really important not to give mixed messages.

Several times he said positive things but shook his head at the same time  so the power of the message is weakened. When gestures contradict the words being said then the message is not clear and unconsciously this can be interpreted as being untrustworthy.

He used a palms up gesture and this together with the upward intonation of his voice canbe perceived as saying ” like me”, ” please believe me” particularly when it is used a great deal. An upward intonation is a questioning intonation, (australians use it a lot ) and when used repeatedly it can seem like you are questioning yourself or are a bit unsure.

He is passionate about what he says and that does come across and in his keeness to emphasize points he has a tendency to bend his knees and lean forward at the same time as using the palms up gesture which again weakens the power of the message.

He was much more powerful and convincing when he was standing still and spoke with a deeper pitch.

In common with many speakers he used lots of gestures which distract the audience and detract from the message. Fewer gestures marking key points would create a more claerly defined emphasis and make his speech more powerful.

I found it difficult to see a thread through the speech. (I spoke to several people afterwards and they weren’t clear either).There were three or four key messages but they were “buried” and it was not clear what he wanted the audience to get. It lacked clarity and he  (and his speech writers) made the same mistake that most speakers make – it was written from the point of view of what he wanted to say, rather than what he wants the audience to take away and what they need to hear.

If you contrast that with Barack Obama’s recent American Jobs Act speech to Congress, within 3 minutes it was obvious what the President’s  message was, and he then repeated it many times ( 14) within his speech. ( You can read a brilliant review of that speech  at http://bit.ly/quUcIN)

Ed Milliband is passionate about making a difference and when he learns to align his unconscious communication with his conscious message he will make a bigger impact. With just a bit of tweaking his leader’s speech could have been much more powerful.

So waht lessons are there for your business presentation?

1) Make sure that your conscious messages are aligned with your unconscious ones so that they add to the impact rather than undermine it.

2) Be clear exactly what it is you want your audience to get.

3) Have one strong and distinct message that you deliver in a way that the listeners “get it”.

It will be interesting to see if The Prime Minister is clearer in his speech next week….