What the Sea Odyssey Can Teach Us about Presenting 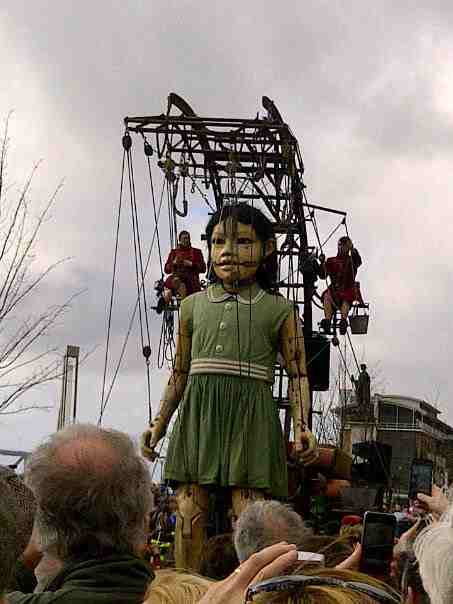 It began with a giant little girl sleeping in the park and ended with three giants leaving the city by boat.

I was one of over 600,000 people who had the privilege to see the most marvellous, fantastic and heart-warming sto ry ever acted out on the streets of Liverpool. It was spectacular in the true sense of the word.

The story of a giant who perished on the Titanic, his orphaned Little Girl Giant, her giant dog Xolo and her diver uncle. was played out over three days.

The story was created by Jean Luc Courcoult, artistic director of Royal De Luxe, who was inspired by a letter sent by a 10 yr old girl. May McMurray, to her father William, who was a bedroom steward on the Titanic. He never survived to receive her letter.

Sea Odyssey shows Little Girl Giant, walking around Liverpool on a quest to learn news of her father from her uncle who has dived to the wreck of the ship.

His brother, the second giant puppet, took a century to learn to dive and having found the wreck of the Titanic has returned to Liverpool to meet his niece and distribute letters from the ship around the city. They eventually meet up and  sail away from the city down the River Mersey.

The story touched the hearts of everyone who watched it.

Great stories have the power to do that – to move us and affect us on an emotional level that mere facts and figures don’t.

And great presenters the world over know this and use it to great effect.

We all love to hear stories and effective use of stories is a key tool for creating an outstanding and memorable presentation.

So what’s your business story?

What stories can you tell in your presentations that will move people to take action?

When you make an important point in your presentation always see if you can link it to a story.

Whenever you make people think, follow up with making them feel and the more you do this the more your confidence will grow as a speaker.

People who were there to see Sea Odyssey will remember it for a long time to come.

Using stories can help your presentations to be memorable too.