Are you a Claimer or a Blamer? 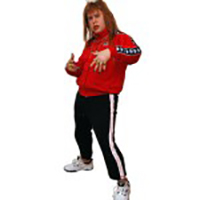 I’ve been watching some of the re-runs of the comedy show “Little Britain”, and you may or may not be a fan of it but I’m sure that you have encountered many such as the teenage character Vicky Pollard played by Matt Lucas.

I know I have, both when I was a teacher and in business!

Vicky’s inevitable reply is “ Yeah but…”,”No but…”, “ Yeah but…” and she always has excuses and seeks to blame someone else for whatever has happened. She is an example of a blamer.

The approach I use with my Lead Like a Woman  Personal Coaching clients is one that is underpinned by the basic principle of cause and effect.

Are you at the cause of everything that happens in your life  – in other words are you a claimer ?

or are you at the effect of everything that happens to you  i.e. a blamer?

Those at effect (blamers) won’t have results but will always have reasons and excuses for why they don’t and these may seem to be very real and valid.

“ The presentation would have been much better if we’d had more time”.

Those at effect point at something either inside or outside of themselves over which they have no control and that will be the excuse that keeps them boxed in to the present situation.

And it is sometimes nice to have reasons or excuses but ultimately it is frustrating and stressful when we don’t get the results we want.

Being at cause is a belief that we create our results either through our actions or our non-actions.

We are responsible for all of the results that we get in our lives even if it seems to be those things that are outside our control (claimer).

Now it doesn’t matter whether this is true or real.

If you act as if it is true, you will get better results as a result of it.

Being a claimer is about having a mindset that says “everything is my responsibility, but nothing is my fault” and then acting as if it is true.

So which side of the equation are you on?

Are you a claimer or a blamer?

In the next two weeks, whenever you begin to find yourself making excuses or blaming others for the results that you are getting, stop and ask yourself the following questions:

because once you begin to adopt this mindset it gets rid of boxed-in thinking and empowers you to get exactly the results you want to achieve.

P.S. If you want help to move from effect to cause why not take advantage of one of the free Transformational 1-2-1 Coaching Conversation calls I run every month ?