Getting Rid of Procrastination 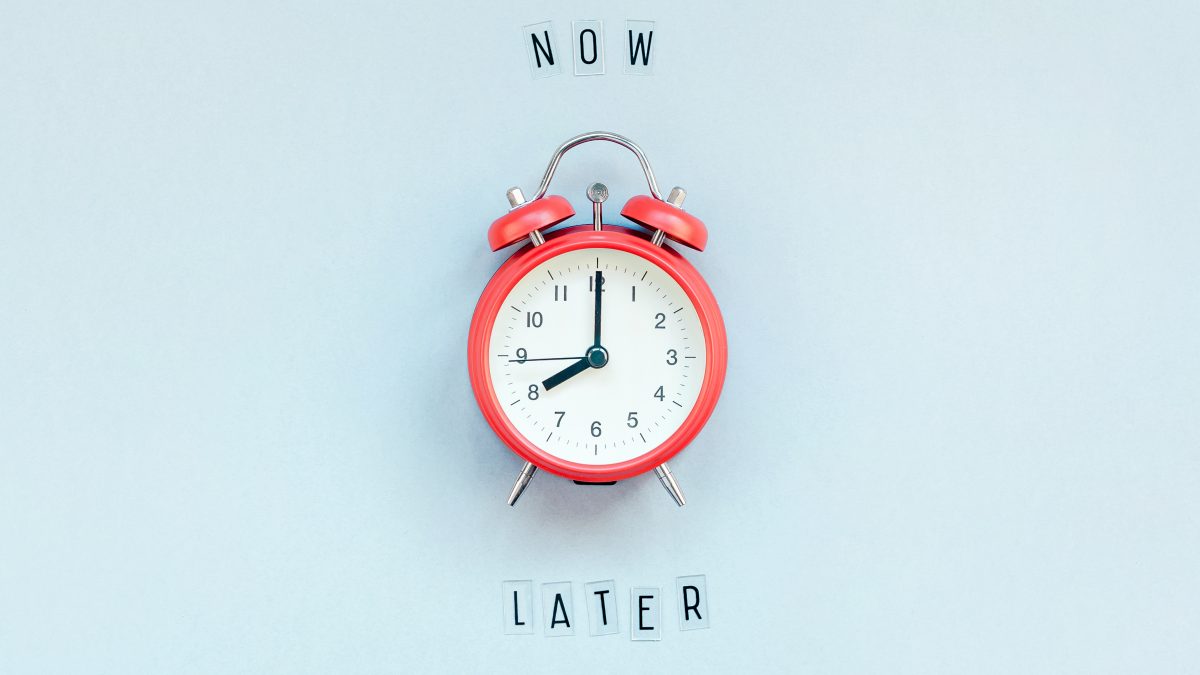 It’s Friday afternoon and the clock is ticking.

You’re working furiously to complete a task before the five o’clock deadline, while silently cursing yourself for not starting it sooner.

How did this happen?

Why did you lose your focus?

Well, there were the hours that you spent re-reading emails and checking social media, the excessive “preparation,” the coffee breaks, and the time spent on other tasks that you could have safely left for next week.

Does this sound familiar? If so, you’re not alone!

Procrastination is a trap that many of us fall into. According to researcher Piers Steel, 95% of us procrastinate to some degree.

While it may be comforting to know that you’re not alone, giving in to this impulse can have serious consequences. For example, even minor episodes of procrastination can make us feel guilty or ashamed. It can lead to reduced productivity and cause us to miss out on achieving our goals. If we procrastinate over a long period of time, we can become demotivated and disillusioned with our work, which can lead to depression and even job loss, in extreme cases.

So why do we procrastinate, even though we know it’s against our best interests?

In psychology, it has long been believed that people who procrastinate have a faulty sense of time — that they think they will have more time to get something done than they actually do. While that may be true for some, more recent research suggests procrastination is linked to difficulty in managing stress. Procrastination can lead to increased stress, health problems, and poorer performance. Procrastinators tend to have more sleep issues and experience greater stressful regret than non-procrastinators. What’s more, procrastination can also hinder your self-esteem with the guilt, shame, or self-critical thoughts that can result from putting off tasks.

More specifically it seems that task aversion is to blame. It’s “a purely visceral, emotional reaction to something we don’t want to do,” says Tim Pychyl, author of Solving the Procrastination Puzzle. The more averse you find a task, the more likely you are to procrastinate. Pychyl identifies a set of seven triggers that make a task seem more averse.

we are more likely to find a way to put off doing it.

Procrastination eats away at your momentum and is what keeps you from making real progress. It may not be a problem for you right now but be sure it will pop up one day when you least expect it.

How can you Get Rid of Procrastination?

The first step to getting rid of procrastination is to recognise that you are doing it and to identify the reasons why you do it and then you can start to change it.

Bring to mind something you’re putting off right now.

If it is set off by one of Pychyl’s seven procrastination triggers, which one?

Why are you delaying?

Are you afraid of success?

Doubt your ability to see it through?

What is the real reason for putting it off?

When you have identified the reason it’s easier to get start to get yourself out of it and here are  some tips for the next step….

If you’re prone to delaying projects because you find them overwhelming, try breaking them down into more manageable chunks. Organize your projects into smaller tasks and focus on starting them, rather than on finishing them.

Strip out all the little ways in that make it easier for you to procrastinate. Take note of the ways your attention wanders. Maybe you’re drawn to Facebook or Twitter. Maybe you’re prone to talking with colleagues. Single out these distractions and eliminate them from your workspace. On your computer, make sure to never open a browser with social media pages. At home, stay inside your work zone. Use headphones and soothing music to stay isolated from the world.

Every time you decide to focus on a single task and work on it until completion, you’re building up your resistance to procrastination. Because the brain is a muscle, consistent workouts will make it better at accomplishing things.

Procrastinators focus more on short-term gains (avoiding the distress associated with the task), as opposed to long-term results (the stress of not doing it, as well as the consequences of avoiding this task). Instead, try focusing on why you are doing this task: What are the benefits of completing it?

Nothing breeds momentum more than completion. Make a list of small unfinished tasks that you keep putting off. Set a timer for 10 mins and complete one of the tasks every day. You’ll be surprised at what a difference it makes!