How Did David Cameron’s Delivery Help Or Hinder His Message? 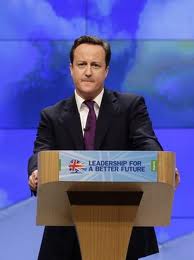 Following on from last week’s analysis of Ed Milliband’s  conference speech that I did for Radio Merseyside, I did the same thing  this week for the Prime Minister’s speech to The Conservative Party Conference.

The words do matter in a speech or presentation but the way they are delivered matters more in terms of how it is received and perceived. And when the gestures do not match the words it creates unconscious confusion and the message is weakened. So how did David Cameron do?

As he came on to the podium he was smiling, looked composed and confident but he then used rather a curious gesture. He had both palms up facing the audience and used a pushing motion and he used a single handed version several times too. This is rather an authoritative gesture and can make the audience feel as if they are being pushed away. It’s a bit like the gesture you would use to a child when you say ” enough is enough!”

He stood most of the time with most of his weight on his right leg which causes his right shoulder to drop and this leaning to the right became much more pronounced as his speech went on. At one point his shoulder was so far down that he was almost turned sidewards to the audience. This is an unbalanced and closed posture and because it is uncomfortable he then shifts his weight to his other side. This can come across as unconsciously weighing up the alternatives, that he’s not as confident as he appears to be, that he’s unsure about what he’s saying or there’s some doubt. Turning away from the audience can also seem to be insincere and defensive.

He was most powerful when his weight was centered and evenly balanced over both feet and his shoulders were level.

When he was emphasizing certain points he shifted his weight backwards and forwards so he was almost bouncing. This can convey passion but also impatience,that he’s overenthusiastic and it can seem like  he’s trying hard to convince. And at times he held onto the lectern which indicate uncertainty.

He used a variety of hand gestures – palm down showing authority, clenched fist indicating tension and possibly nerves, and a fist with a pointed finger which has been shown to produce negative feelings in others particularly when it is timed to the speaker’s words  as David Cameron did, because it can be taken to be aggressive.

A lot of the time he spoke with his chin up which can imply superiority or arrogance- as if he is looking down his nose at you – and he had a tendency to stick his chin out, a gesture that Mrs, Thatcher often used.

He used his voice well and varied his tonality and because he used a downward intonation more he appears to have more authority. He does have a tendency, as most politicians do, to use an upward intonation too much which can sound insincere, doubtful and even untrustworthy.

He finished in a powerful position in the centre and used a commanding  intonation but this was undermined  by his arm gesture, both arms out with palms upwards like a preacher or priest  appealing to the congregation to believe him.

Overall he used fewer gestures than Ed Milliband last week and that generally is the case when you feel more secure in your position which is understandable as David Cameron has been leader of his party for a lot longer than Ed Milliband has.

So what can we deduce from this?

Both leaders have strengths and they both undermine their respective messages by their unconscious gestures, posture, use of voice etc.

They both have a lot  to work on!

with best wishes for your success.