Is Rude Networking a New Trend in the Recession? 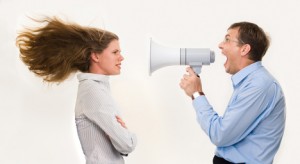 It has been said many times that a great way to grow your business is through networking.

But it seems to me that “rude networking” is on the increase!

It’s about how rude people are in their conversation. To give you jst one example….

I was at a networking event the other day and was approached by someone, let’s call him Doug to save his embarrassment, although come to think about it he’ll probably be oblivious! He certainly was when he spoke to me.

He gave me a bone crusher of a handshake, shoved his business card at me  and then proceeded to bombard me with information for almost 10 mins. I didn’t get the chance to get a word in edgeways. I actually broke rapport with him several times just to see what would happen but he still carried on with the monologue. He was talking at me rather than to me. When he did eventually stop and ask me what I did, I managed to get a sentence out but it was obviously not what he was looking for because he actually started to “work the room” i.e. was looking for others to speak to, so I stopped talking , thanked him and went to get a drink of water.

And throughout the evening I noticed him doing exactly the same thing over and over again. From watching other people’s responses they felt the same way I did. And he didn’t seem to be aware of how many people he was switching off. I don’t know how many business cards he collected but I’m he did very little in terms of building relationships. It’s got nothing to do with the networking situation – he was actually just very rude.Would he do that when talking to friends? I doubt it, so why do it when meeting new people?

And this seems to be a growing trend. I met with a good friend of mine yesterday who is heavily involved in running several networking groups and she’s noticed exactly the same thing happening.

You always hear that it’s all about building relationships and not about selling…… so why do so many people choose not to get it?

Is it because of the recession – that now more people realise that they “need” to network and so go out and do it but don’t really know how?  or there is now such a sense of urgency that they have to get new business that they try to rush the whole process? (and actually scupper their chances in the process).

It’s been said before but effective business networking takes time. It can’t be rushed. It’s about  pulling people towards you rather than pushing yourself  at them  so that you build long term helping relationships.

I think it’s really useful to think of it as just making new friends that maybe around for a long time.

So what would I say to Doug if I had the chance?

next time you go networking aim to have fun and make new friends.

Aim for quality not quantity and don’t pitch to people.

Show you are genuinely interested in the other person.

Look for ways to help them as you would if they were your good friends.

… and in that way you will start to attract business opportunities rather than repel potential contacts.

And if you got the chance what would you say to Doug ?