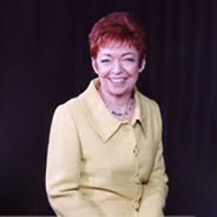 With a background in business management, advertising, the private medical sector, the Employment Department Jill has also worked in the House of Commons for 18 years.

She was appointed as the first female Sergeant at Arms in 2008, which she describes as a formal job with a very formal uniform. Her responsibilities as Sergeant were security, access and ceremonial.

When she retired from the role in 2012 this was said about her contribution “Jill has played a powerful role in mentoring and encouraging other women in the House service to achieve their potential. The number of women now occupying senior posts in the House Service is some measure of the example she has set.”

Her passion is to help people to develop, grow and succeed, from primary school children who are struggling to learn to read through to entrepreneurs finding their way in business and female senior managers who are seeking to crack that ultimate glass ceiling to join the Board.

She is a Trustee of the Beanstalk literacy and a founder member of the Pink Shoe Club, a businesswomen’s network affiliated to Parliament that recognises, develops and celebrates women’s unique talents and skills that complement those of their male colleagues.