Why Go Ski-jumping in Summer? 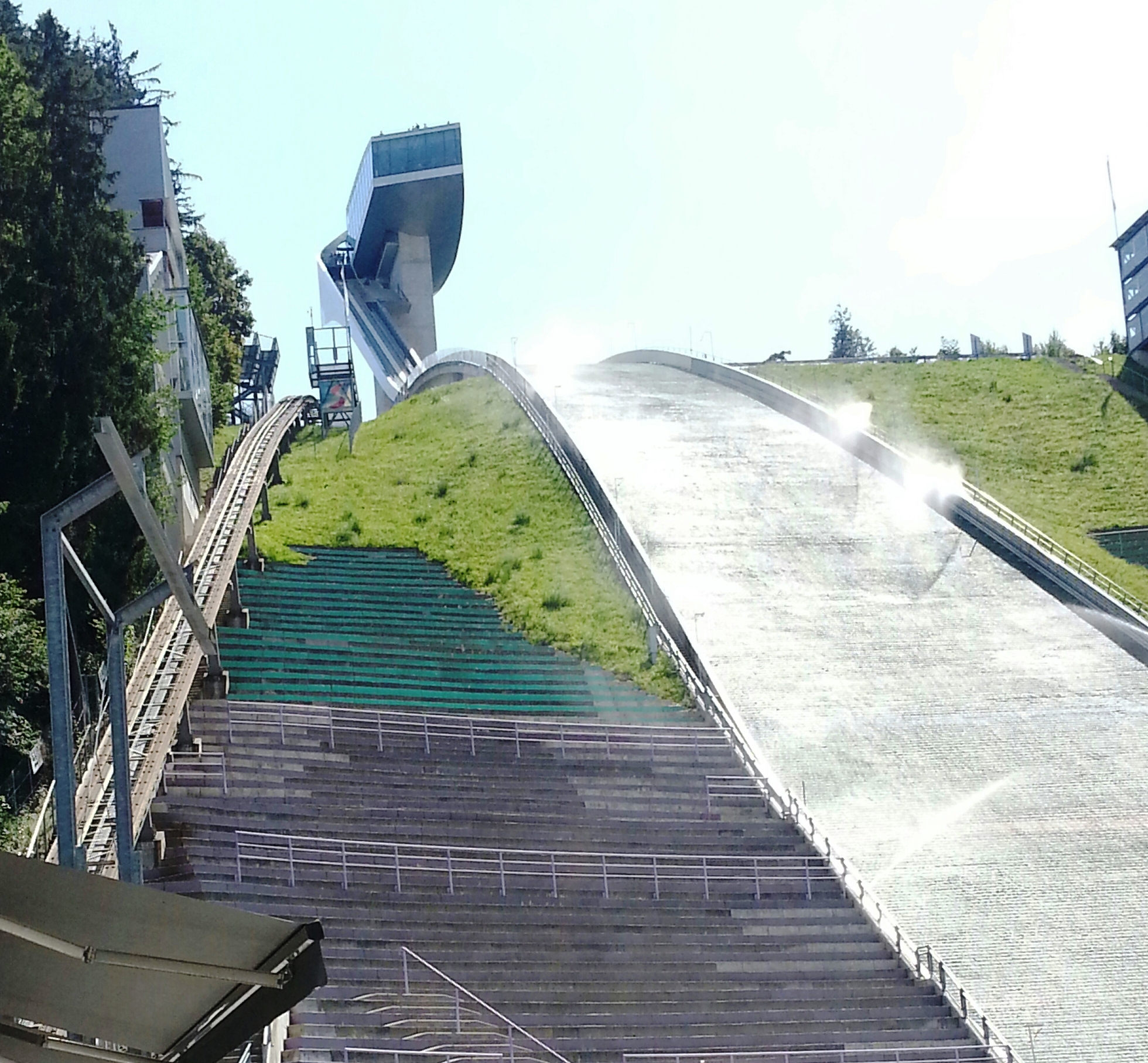 Whilst driving to Italy on holiday we decided to stop off in Innsbruck in Austria on the way.

It’s many years since we’d been there and we wanted to go and see what has become a new icon for the city – the Bergisel Ski Jump, designed by top architect  Zaha Hadid. The Bergisel Ski Jump was one of the venues used for the Olympic Winter Games in 1964 and 1976 and in January each year it is part of the Four Hill Ski Jumping Tour for the best jumpers in the world.

According to the tourist leaflet it’s easily reached by tram from the city centre so we got the tram but it stopped a good way short because of roadworks. We had to walk the rest of the way. It was quite steep and hard work in the afternoon sunshine and my dodgy knees started to complain a bit by the time we got there.

But it was worth it. The views of Innsbruck did not disappoint and you can either walk up the 455 steps to the top of the Ski Jump or get the funicular- dodgy knees dictating the latter for me!

As we were waiting for the funicular car to arrive, enjoying the fabulous view I was wondering why they were watering the track when suddenly I looked up and saw someone hurtling towards me out of the sky. They flashed past me to land within a few feet of the end of the track- just short of the steep drop down the mountain. It was amazing!

We had been here before but then the track had been made of grass. Now it’s made of artificial turf so that the world’s best ski-jumpers can train during the summer months too and that’s why they water it just before someone jumps.

We went up in the car to the 50 m high tower and viewing terrace and stood above the 98m long ramp, take off table and landing slope and it looked really scary! While we were there we unexpectedly got to see him jump again and I just about managed to get a photo and you can see his skis…

Here was someone who is determined to be world class and the best they can be. He was taking the time and making the effort to practice a winter sport in the middle of summer when others weren’t.

And no matter what you are doing, that’s what it takes to be world class, to be the best you can be-  determination, practice and being willing to do what others aren’t.

If you want to be the best you can be at presenting then here are a few things you might want to think about…..

1)      How often do you practise your presentation before you give it?

2)      Are you prepared to make the time to practise when others aren’t?

3)      What are you prepared to do about your presenting skills to be the best you can be?

I’d liked to have found out the name of the ski-jumper we saw because I’d love to find out how successful he is next season…..

To receive further articles, cutting edge presenting tips and more straight to your inbox you can sign up now here.